This girl has got it going on, bringing her Australian quirks to the west coast of Canada and writing web content for women all around the world. Seriously, if you’re a small business owner and need a little help creating content to make your clients go WOW, Nadia is your gal. 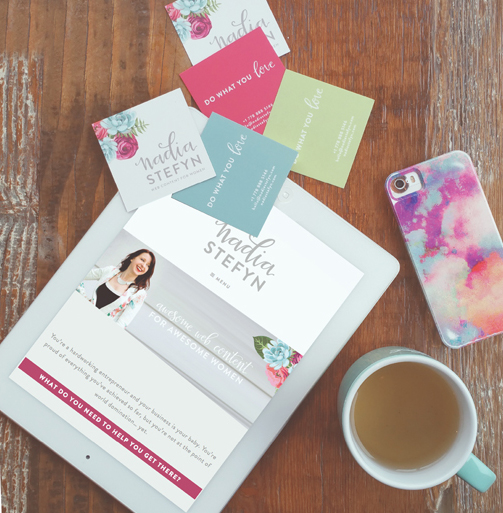 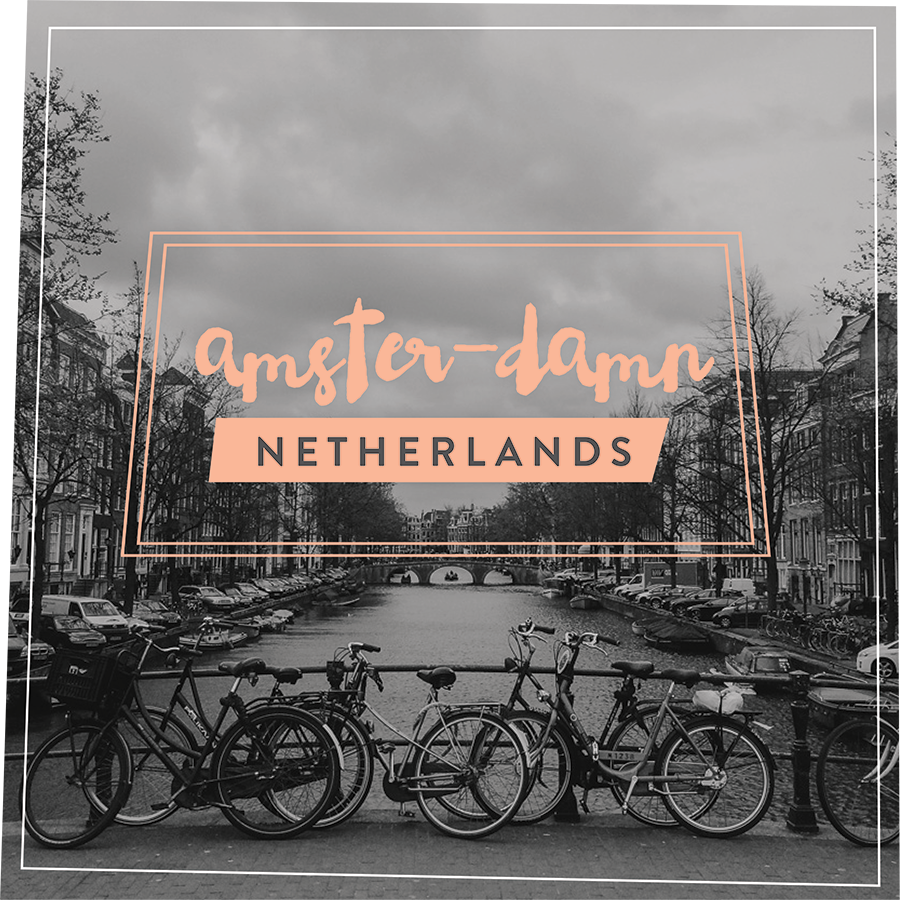 I absolutely ADORED this city, everything about it was just my vibe. The people were so friendly (and the majority of their English was incredible), all of the shops and restaurants were a designer’s dream, everything was priced reasonably, and not to mention being surrounded by those stunning canals was a nice touch!

I was able to meet my friend Nivi “halfway” as she’s currently living in Dubai. This trip also proved to me how small the world truly is, as I also met a couple of girls in my hostel not only from Vancouver, but who happen to live four blocks away. Had to go across the world to meet my neighbours! 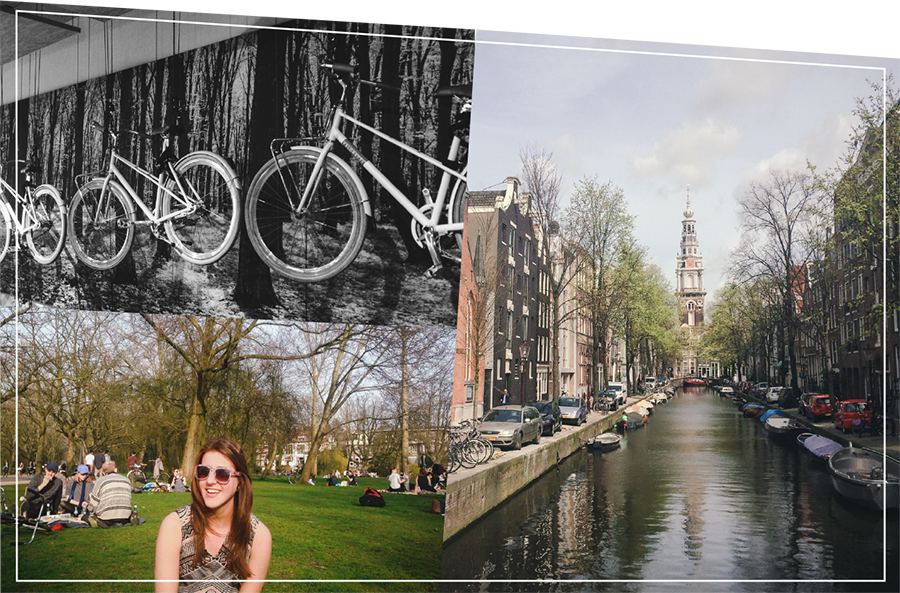 We stayed at two hostels that were from the same company and I would HIGHLY recommend them. COCOMAMA was a little on the smaller side (but close to an adorable breakfast place called TOON), so try to get a spot at ECOMAMA first. Let’s just say this hostel had a hip cafe in the front, bikes hanging from the ceiling, a swing at reception, and a fort. That’s right, a fort! Hands down, my favourite European hostel I’ve stayed at.

VONDELPARK is what all the cool kids will be doing, so make sure to make an afternoon of it. Bring some snacks and wine and you’re set.

Rent a CANAL BIKE (paddle boat) for 1-1.5 hours and explore this city’s canals. Forewarning, while Amsterdam is known for being very chill, “open hours” is a very vague term and we had to walk to a few different  locations to find an open one. You can also purchase some wine as well (and hopefully keep that steering straight!) 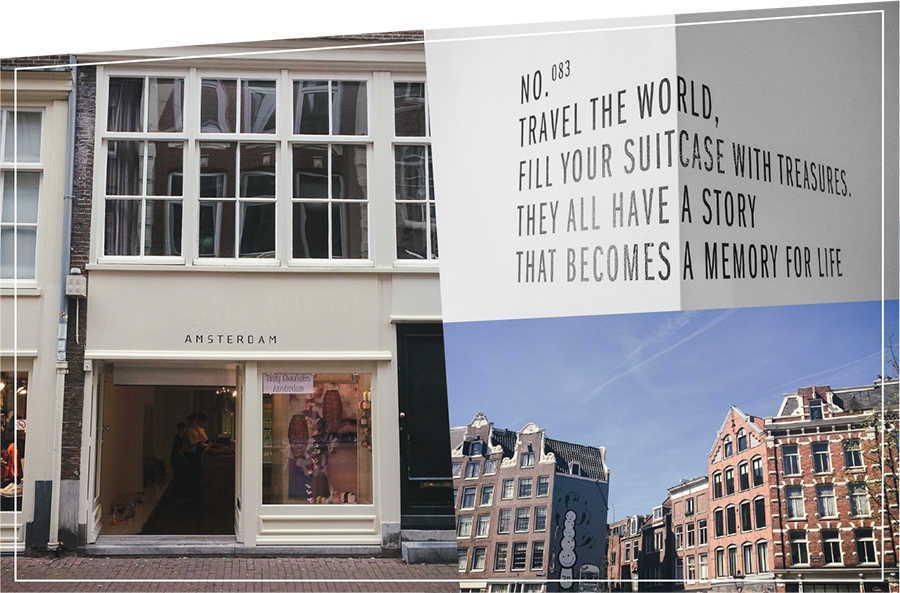 DE 9 STRAATJES (or THE NINE STREETS) is a shopper’s dream. Made up of, you guessed it, nine streets, here you can catch a glimpse of clothing stores and gift shops that give Amsterdam its unique style. Everything was relatively priced here as well.

The one thing I wish I had more time for in Amsterdam was visiting all of the museums, as I wasn’t able to check out the RIJKSMUSEUM or the VAN GOGH MUSEUM (I guess I have a reason to go back!). However, right around that area is where you’ll find the iconic I AM STERAM sign.

For museums, I designated a morning to do the ANNE FRANK HOUSE which is a must do. Prepare yourself for lines up to two hours, and we ended up going before it opened and had to wait quite a while. Of course, it’s worth it, and when you’re done, head across the street to the CHEESE MUSEUM. Nearby as well is THE PANCAKE BAKERY were you can try a dutch pancake. Prepare yourself, the size of these are insane! 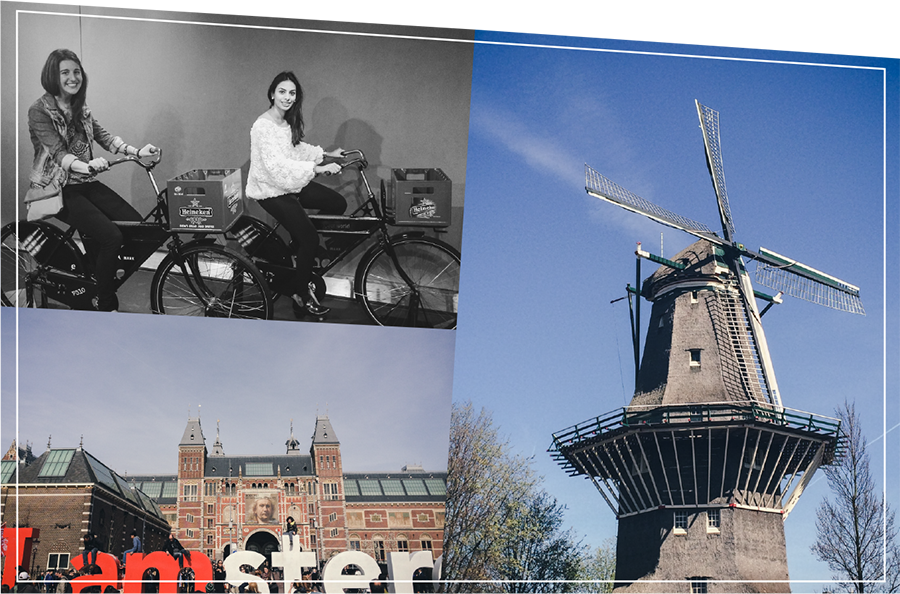 Amsterdam is also home to the HEINEKEN EXPERIENCE, which was really interactive and also included a few beers with the ticket price. Sold.

And a great way to end a trip is to have a few more drinks under a windmill-turned-brewery, BROUWRJ ‘T LJ. Doesn’t get more Dutch than that.

Check out the map below for all the spots I hit up. 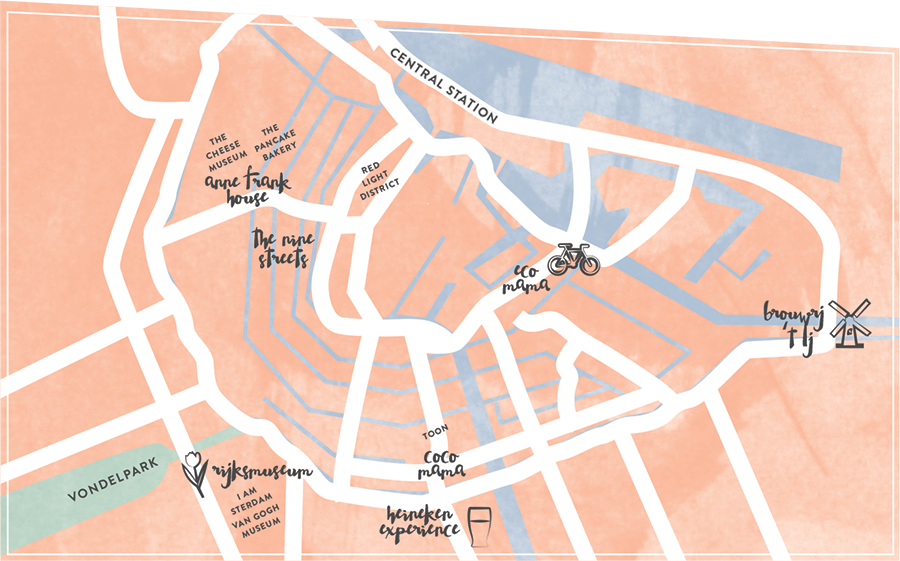 a little bit of groovin’, but a whole lotta chill. let’s get ready to do this summer thing. check out these tunes on 8tracks. 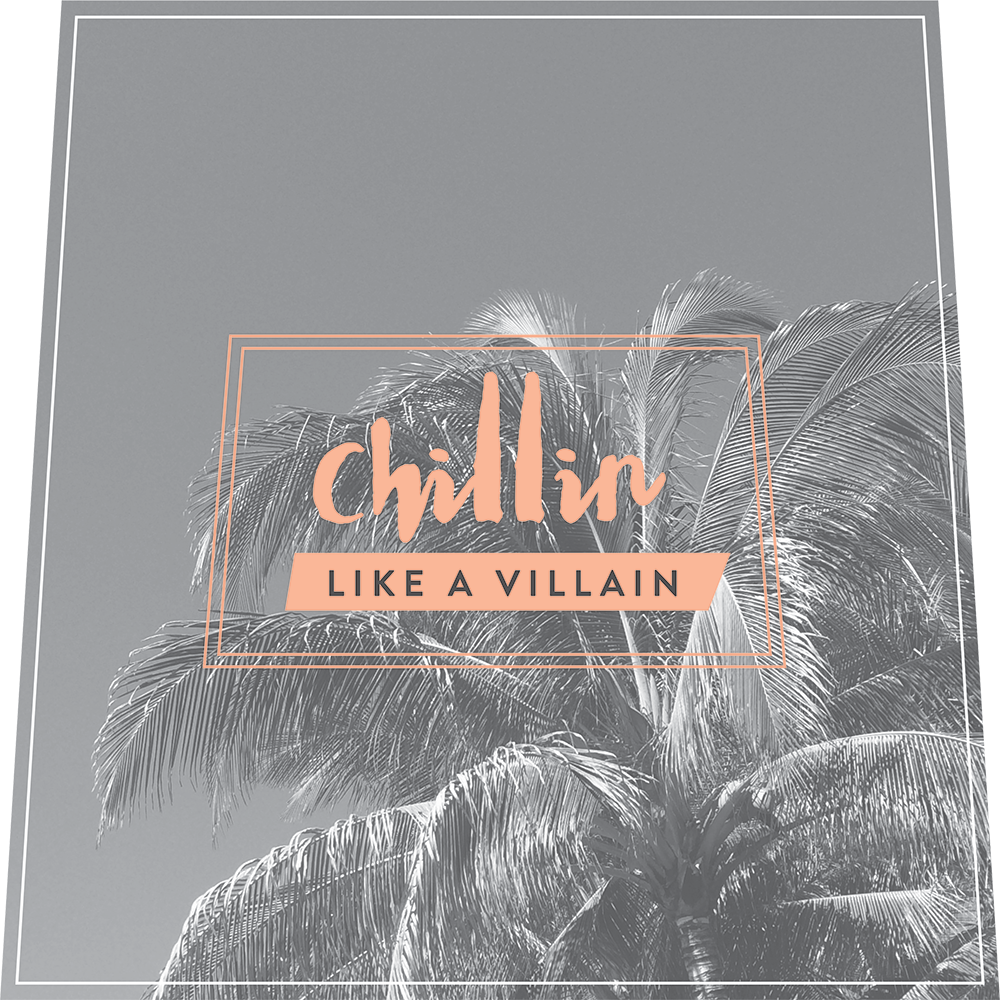 Collaborating with other creatives is always inspiring, and the experience with Sonja at Coates & Co. was no exception. From living in India, to her background in textiles, Sonja was the perfect person to create a space that allowed creatives to come together and share ideas. #girlboss right here, and I loved creating a brand for her that was fresh and simple, but also incorporated funky patterns. Northern British Columbia officially has it going on, and I can’t wait to see what projects and new ideas Coates & Co. will think of. Check out their facebook page and instagram to see what this one part art project, one part social experiment is up to. #wesharethisspace 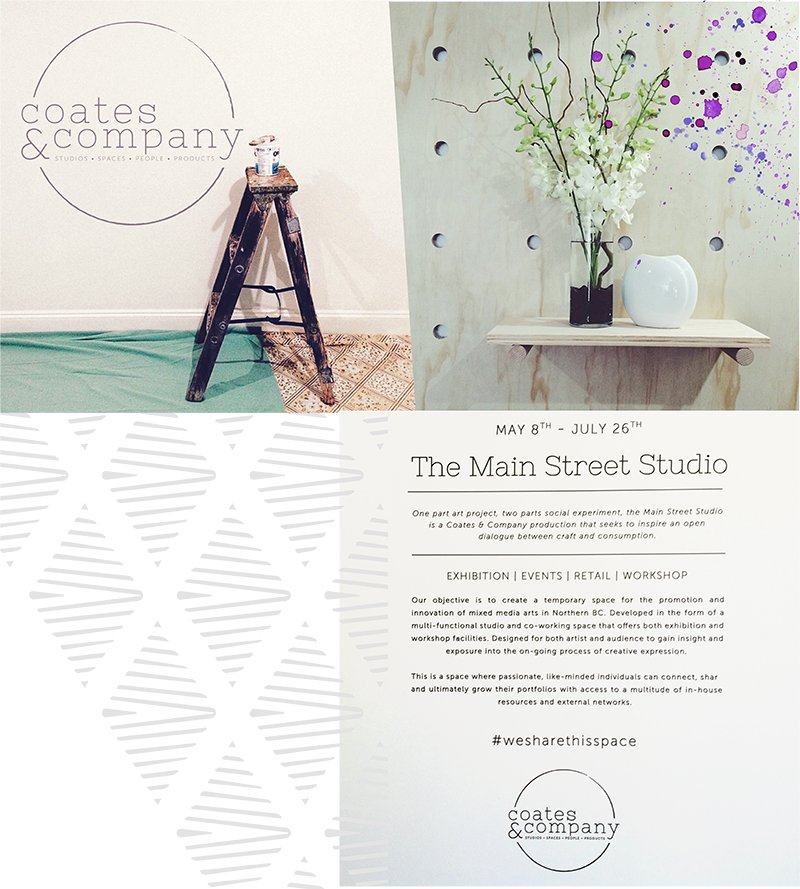 With the summer vibes right around the corner, giant jenga and dominos are the perfect way to get your game on.

Bespoke Decor Rentals (check out what design I did for them) has all the goods to take your BBQ to the next level. They were perfect for my twenty fifth birthday (big kid at heart) alongside my custom pinata (thanks Ashton!). Let’s just say she was a little top heavy and I’m not referring to her head size. Obviously we couldn’t smash that beaut! 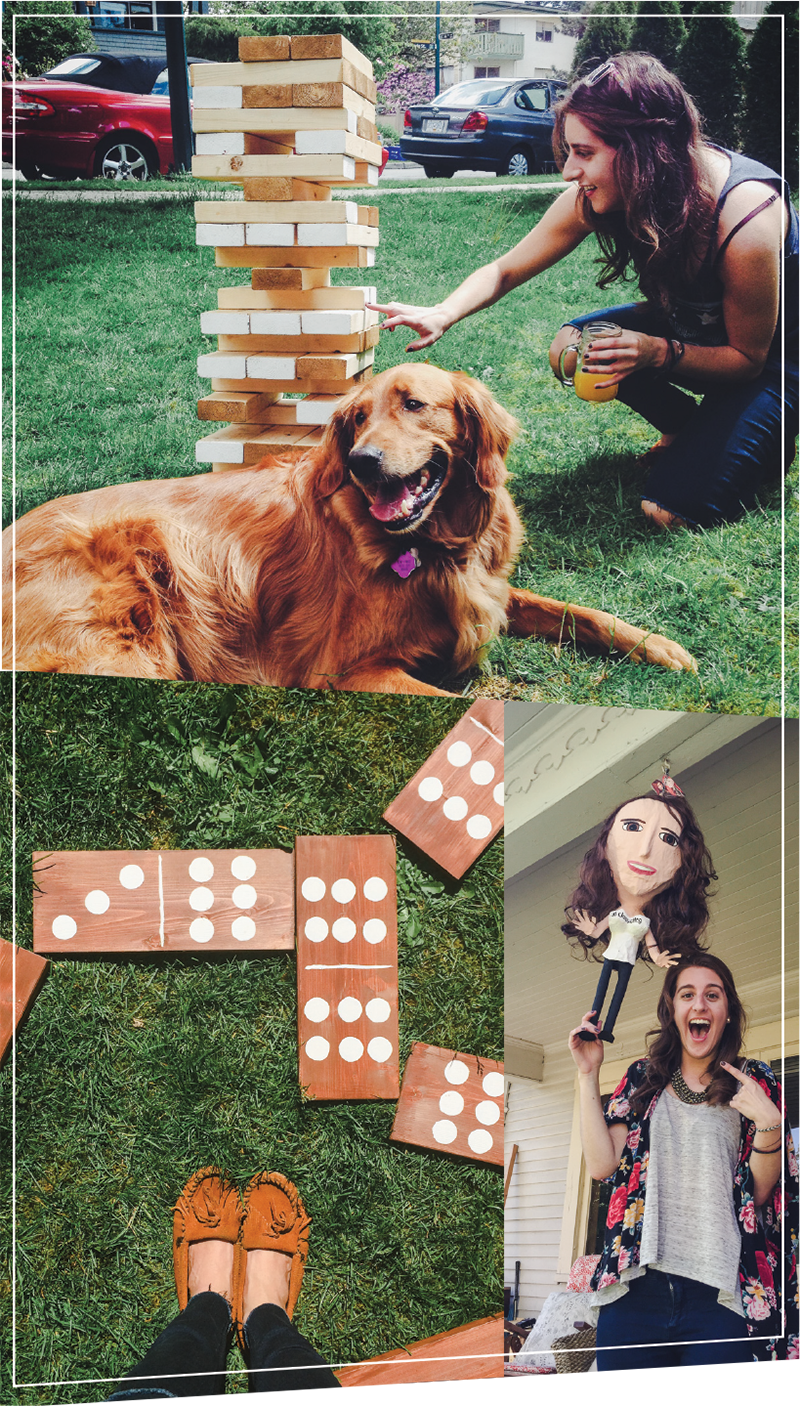 The 2015   l o v e    season is just about to start and I can’t wait to show off some of the designs I’ve gotten to work on the past few weeks. There’s quite a range of styles, but for now, here’s a look back on some of my favourites from previous years. 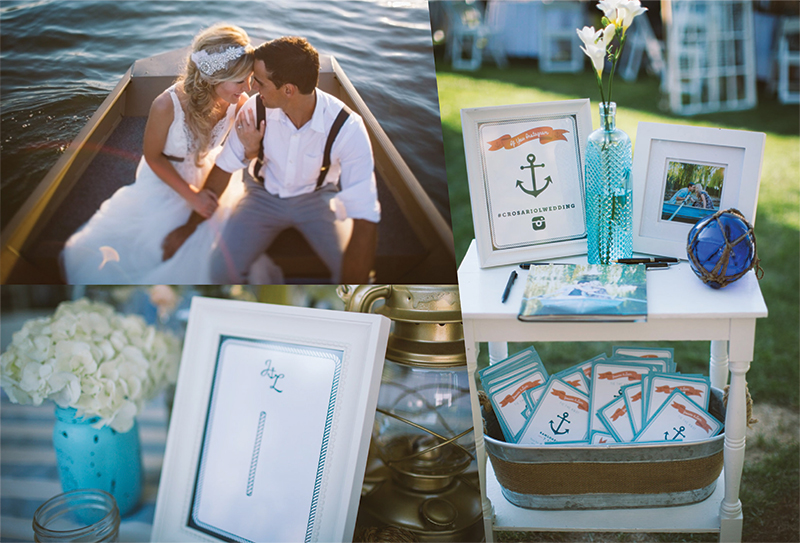 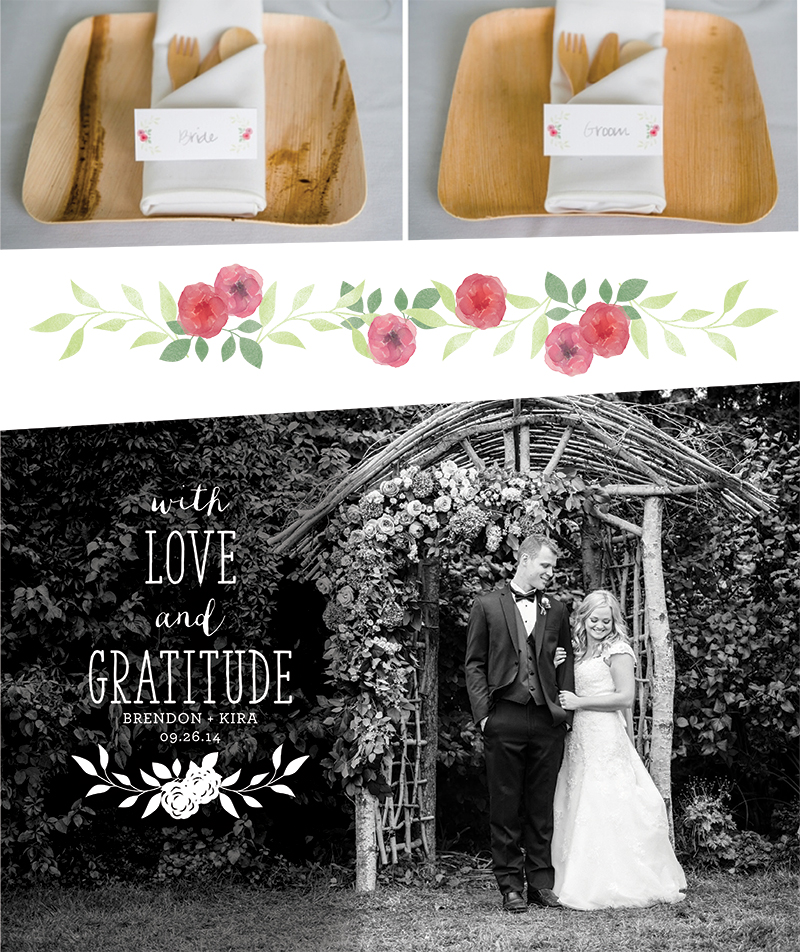 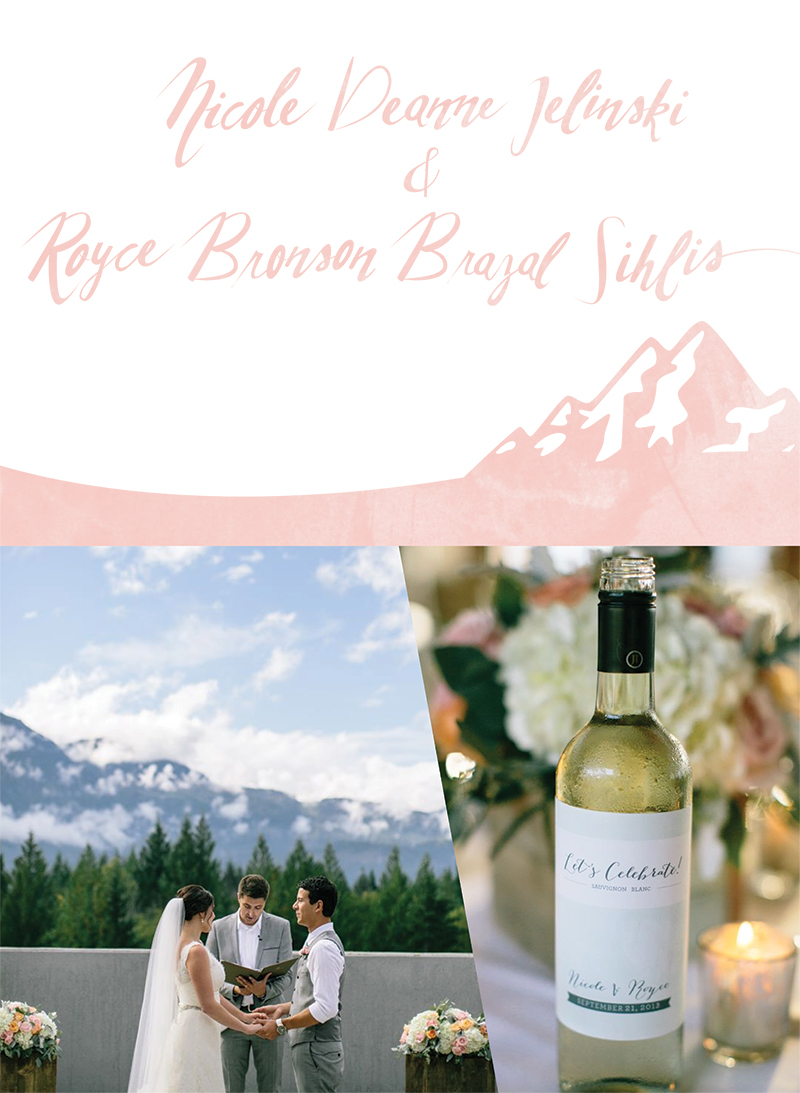 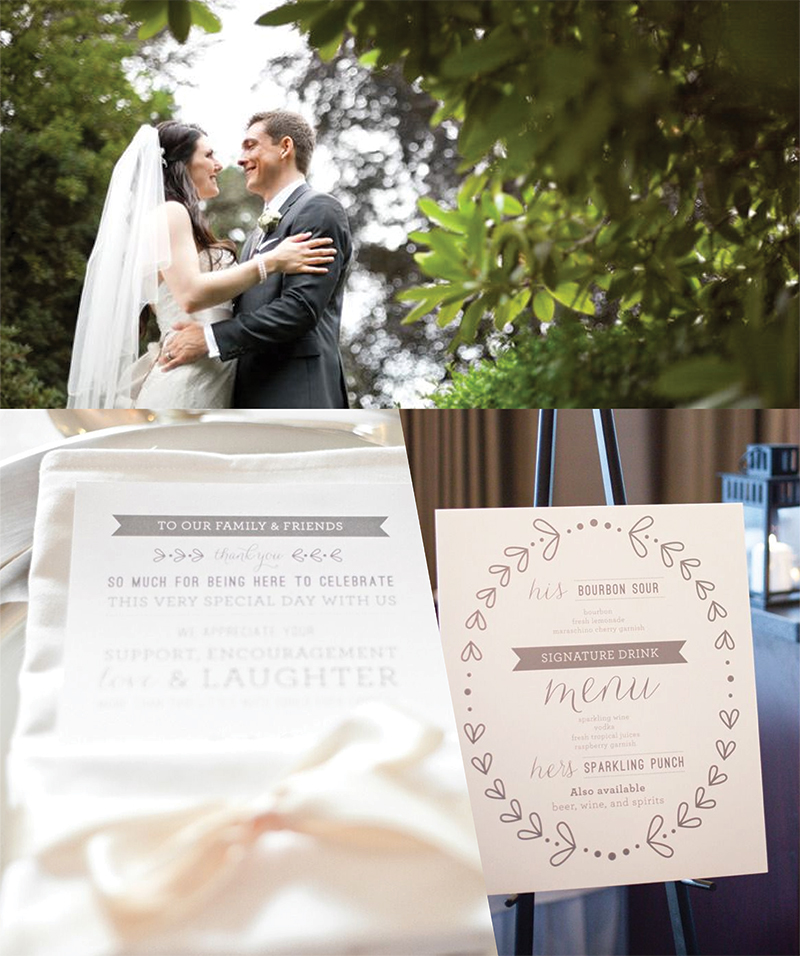 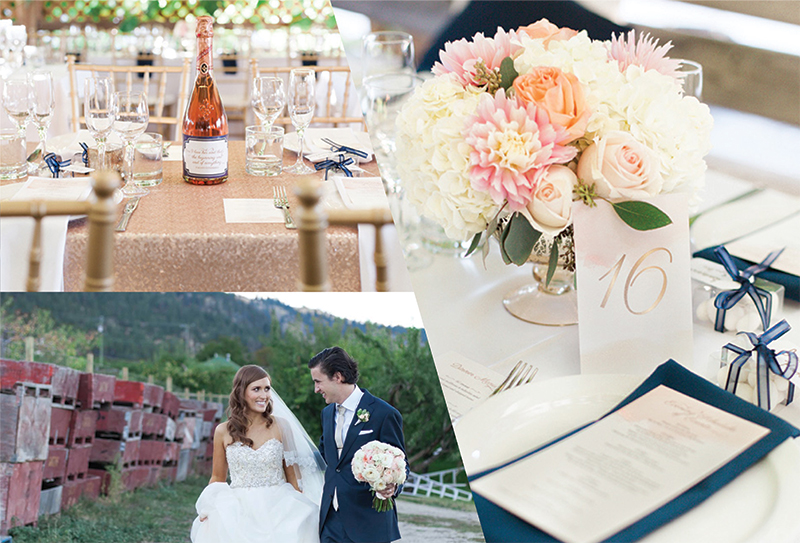 Jamie Fenwick is one talented lady! With an eye for fine art photography and knack for capturing outdoor environments illuminated by natural light, Jamie immortalizes breathtaking moments in time. Her images are then curated on her fine art wedding blog, Vale & Vine. When creating a brand for Vale & Vine, we drew inspiration from Canada’s beautifully diverse natural landscapes. Scroll through the blog, and you’ll no doubt be inspired to head outdoors yourself! 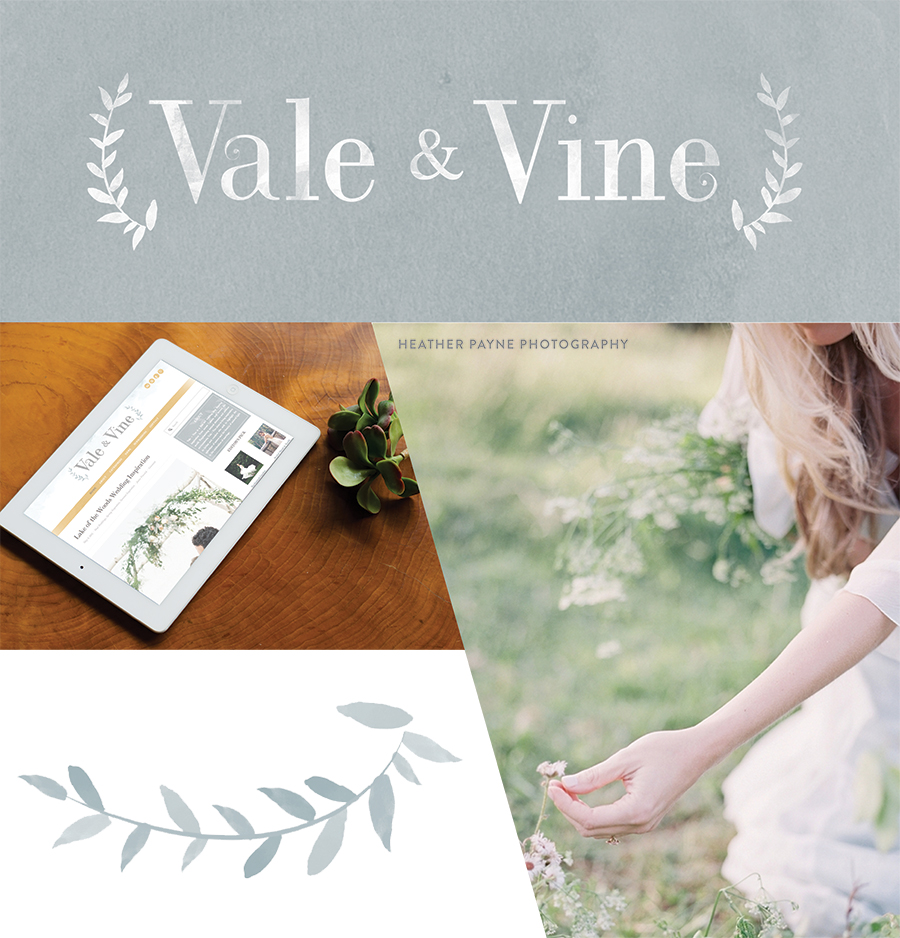 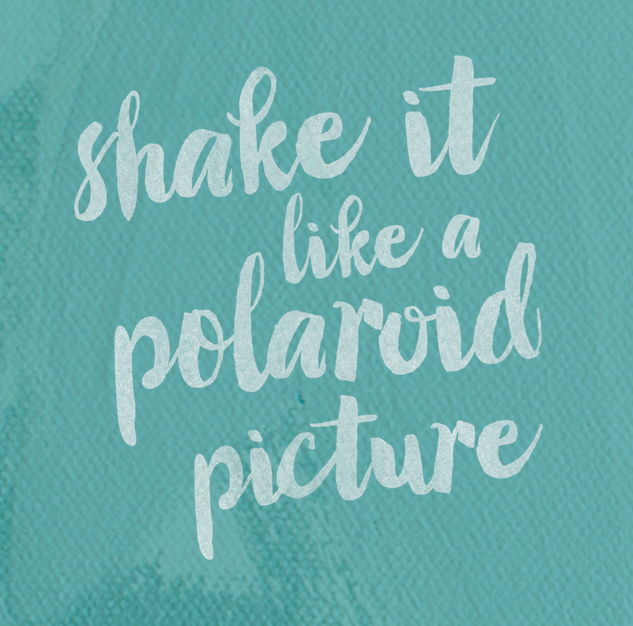 It seems fitting on LOVE DAY to make the grand reveal of Lindsay Kay Photography’s brand and website.

For the past few months, it has been so exciting to see Lindsay find her passion and photograph so many familiar faces from both her and my past (oh the suburbs of Vancouver!). When she came to me wanting a fresh new look, we immediately knew it’d be a perfect fit. Pretty watercolours mixed with an outdoorsy flair was the perfect match for her style. And me personally, I adore the funky navigation and typography on top.

Make sure to check out all the prettiness at her website and head over to her Facebook, where she’s celebrating with a deal! 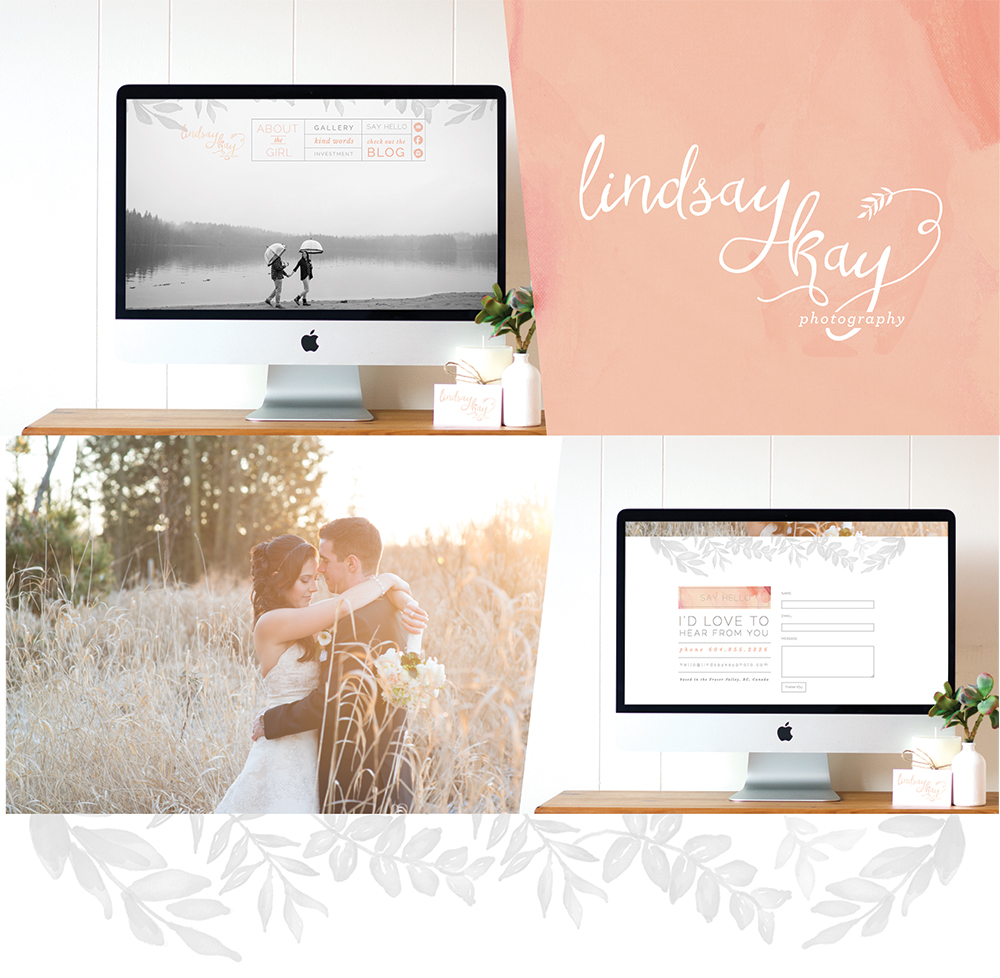