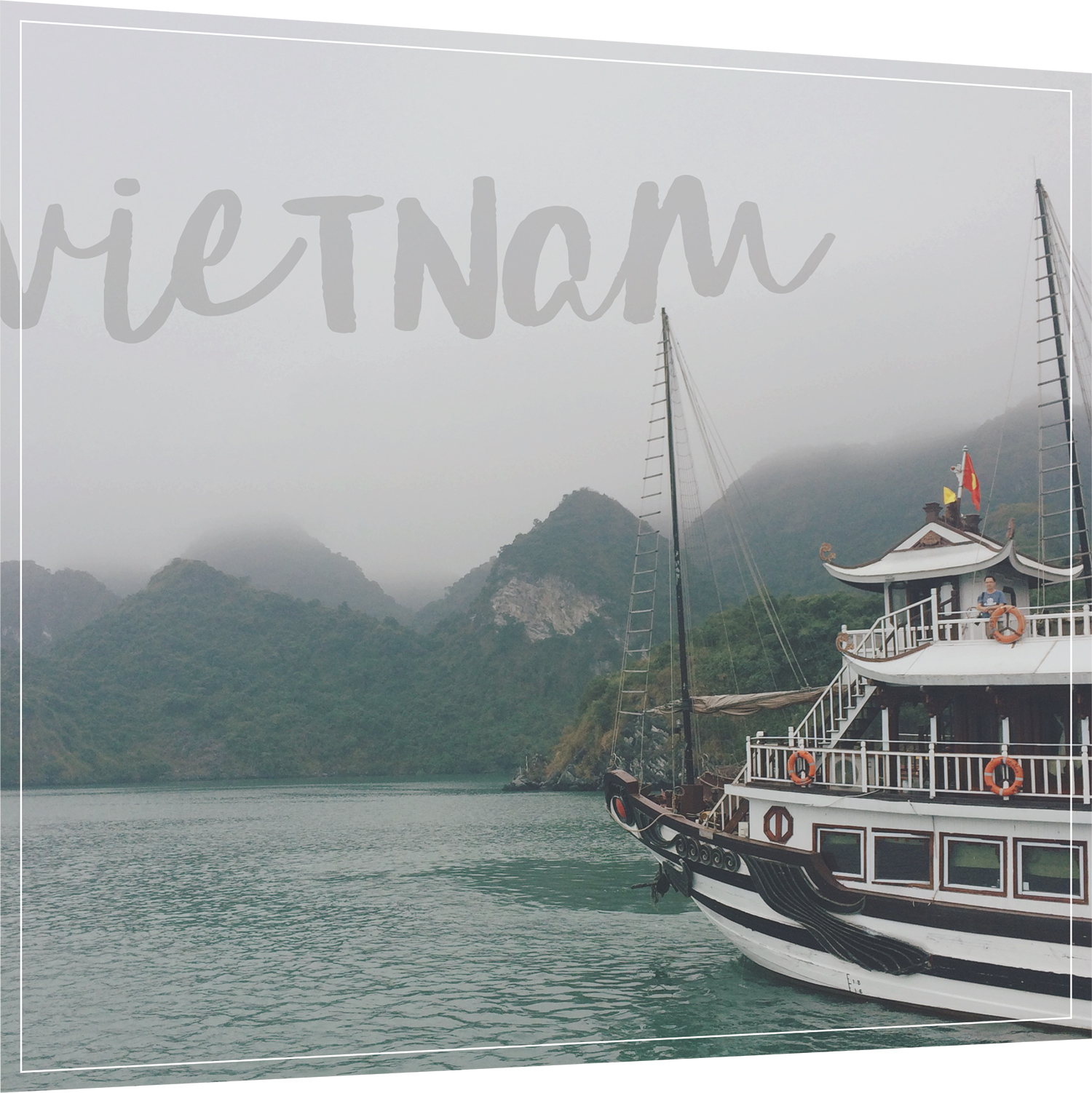 Vietnam was one of the places I’ve only heard incredible things about and I can understand why. The people were friendly, it was relatively easy to get from point a to b, and what can I say about the food? Un-pho-gettable.

This trip consisted of a planner (not myself) and non-planner (myself) and luckily my friend Shannon and I balanced each other out. We had only two weeks to cover most of the South East Asian country, so having an itinerary did smooth along the process (but, I would suggest more time in this amazing country, and if you’re able to, go with the flow).

We started south in Ho Chi Minh, or Saigon, and were immediately astonished by the traffic (majority of them scooters) and how everything, despite looking chaotic, seemed to flow. We started off with an amazing breakfast at L’Usine and had an overhead view of the life below. Whether it was flowers, LCD’s, or family of fours, the streets were truly a glimpse into the everyday. 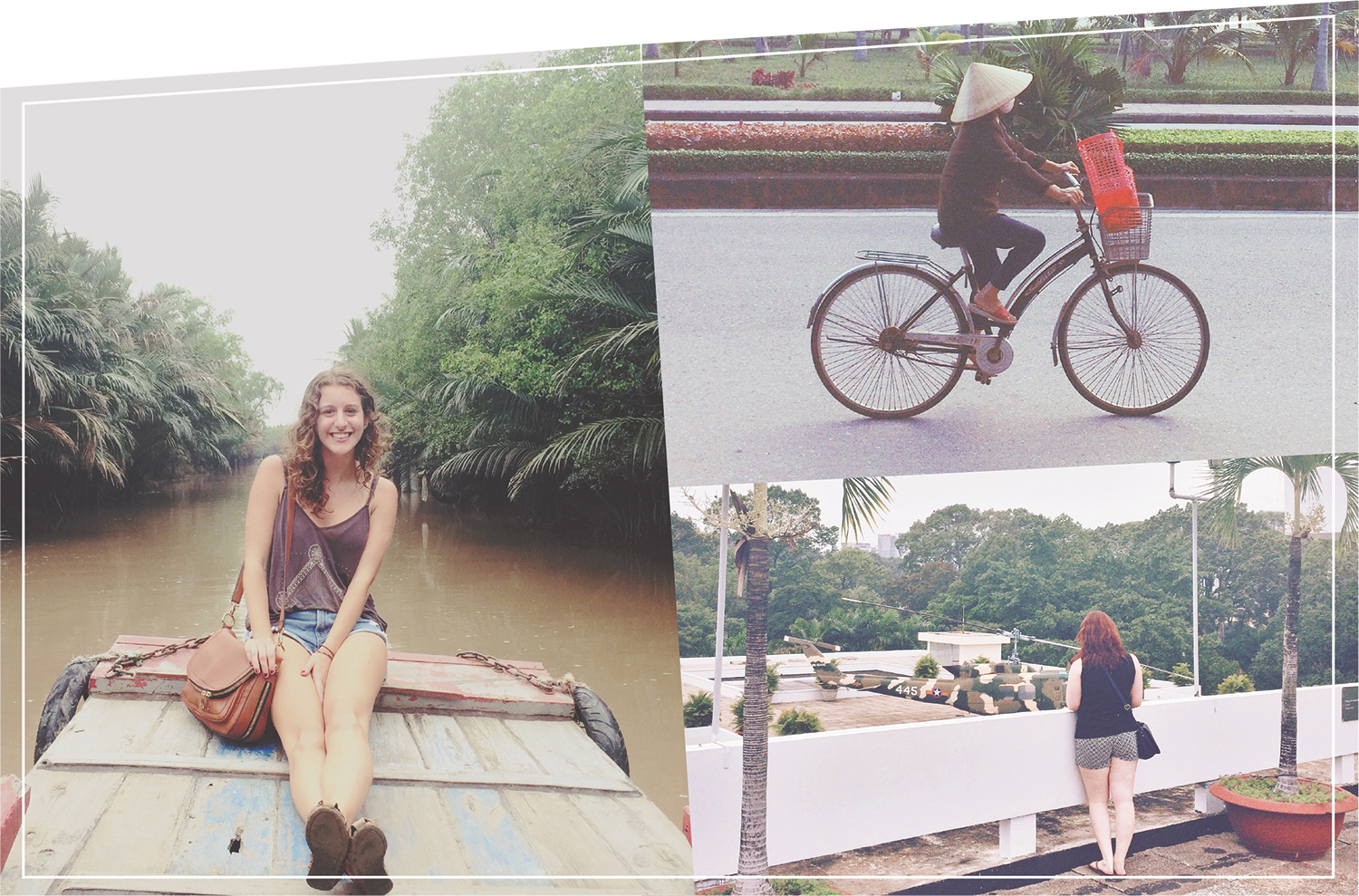 Before a trip to Vietnam, do a little research on the war and be prepared to be taken aback by the impact it had on this country. The war museum and the independence palace are both quite eye-opening and necessary, so make sure to designate an afternoon to these (be prepared for sporadic opening hours) and luckily everything we did was relatively walk-able.

The perfect end to a night in Ho Chi Minh? Level 23 at the Sheraton had a decent happy hour and incredible views.

We became pretty familiar with the tour company Singh Tourist, using them for a day trip to the Mekong River and organizing an overnight sleeper bus that night (surprisingly not that bad, hopefully you can pass out for most of the hectic driving, and some even have wifi).

Our day at the Mekong River consisted of just about every form of transportation, from big boats, little boats, and even horse drawn carriages. Incredible to see the lifestyle of so many who rely on this river. On the way back to the city, we stopped by the Cu Chi tunnels, an elaborate system of tunnels weaving in and out for kilometres, designed by the Vietnamese during the war. If you want to feel like a spy as well, hop into one of the hiding spots!

From there, we began making our way up the country to Nha Trang, and immediately you can see why this has turned into a getaway destination for, surprisingly, Russians. If you can head earlier in the day, check out the mud baths for quite a hilarious experience. 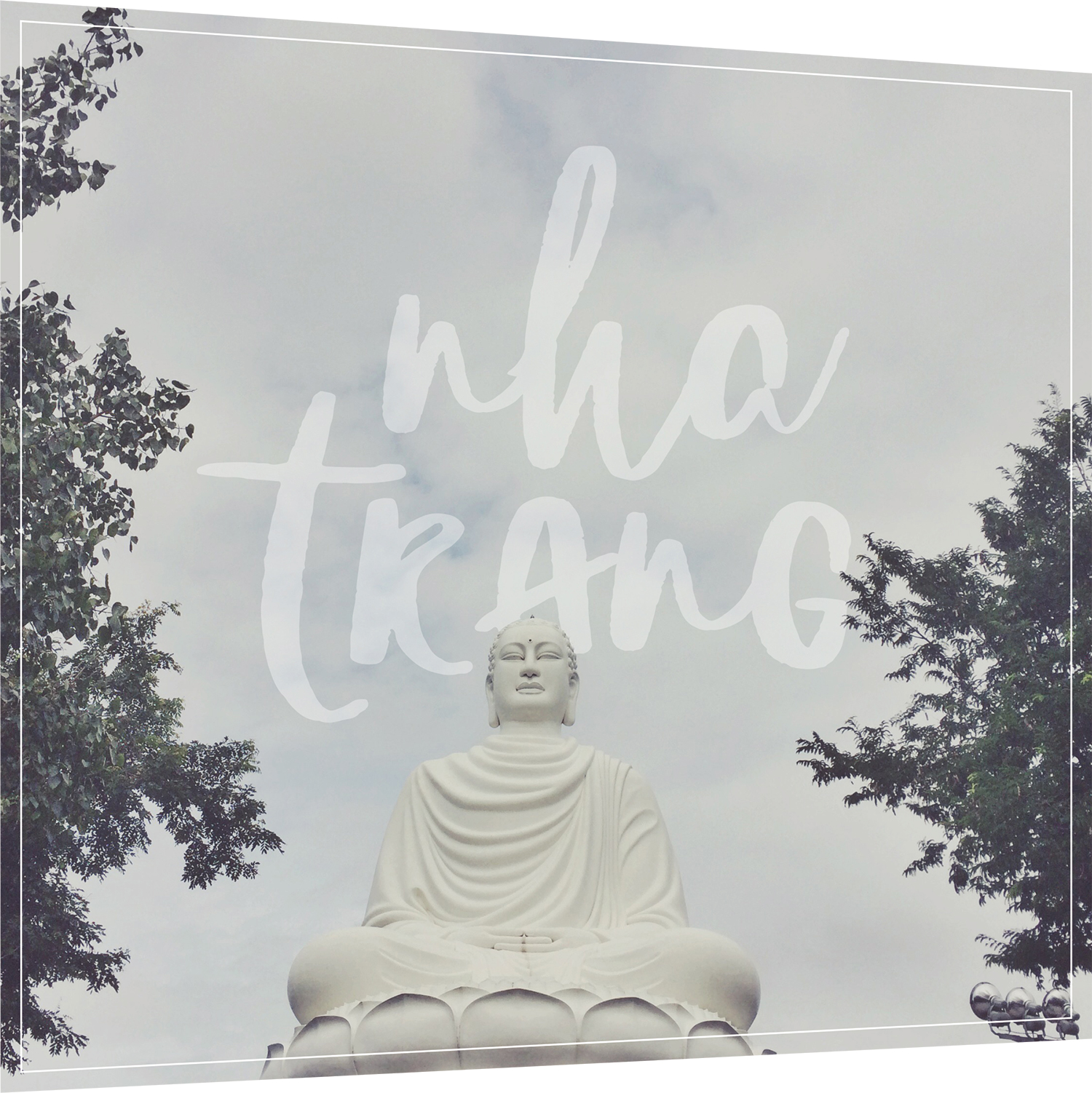 During our time in Nha Trang, we found temples, and then we found rollercoasters (because those two clearly go hand in hand). If you want to start off with some culture, head to Po Nagar and Long Son Pagoda (an incredibly large white buddha) in the morning. Then, grab a gondola to an island off the coast called VinPearl. As you make your way towards it, it feels a little out of place, but enjoy the amusement park and waterpark if you have time. 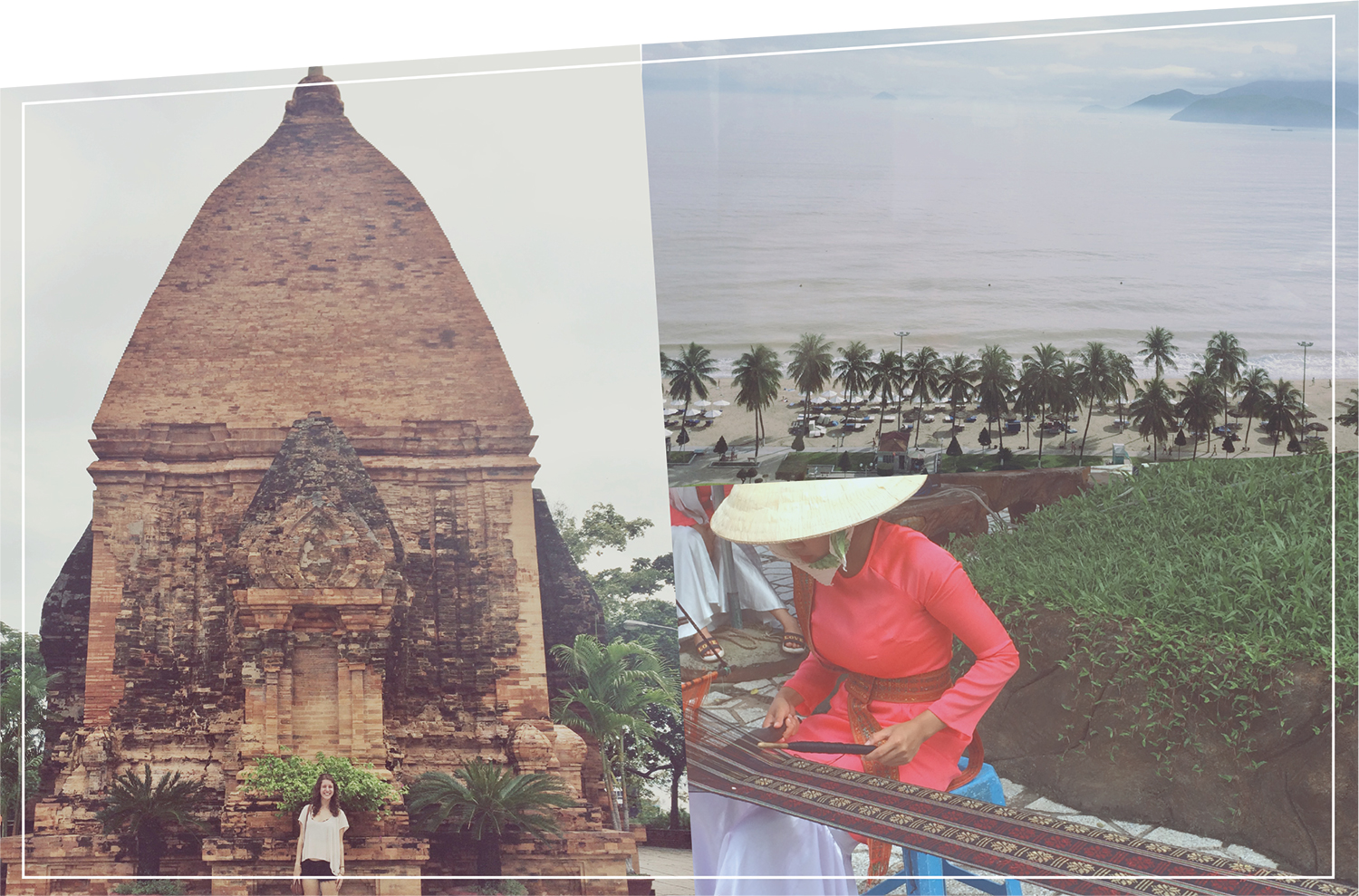 Our next stop was Hoi An, which will need to be revisited again under drier circumstances as we unfortunately got pretty flooded (like, knee deep flooded). You could still see the charm throughout the old town, enjoy all of the lanterns and make sure to try all of the local delicacies. 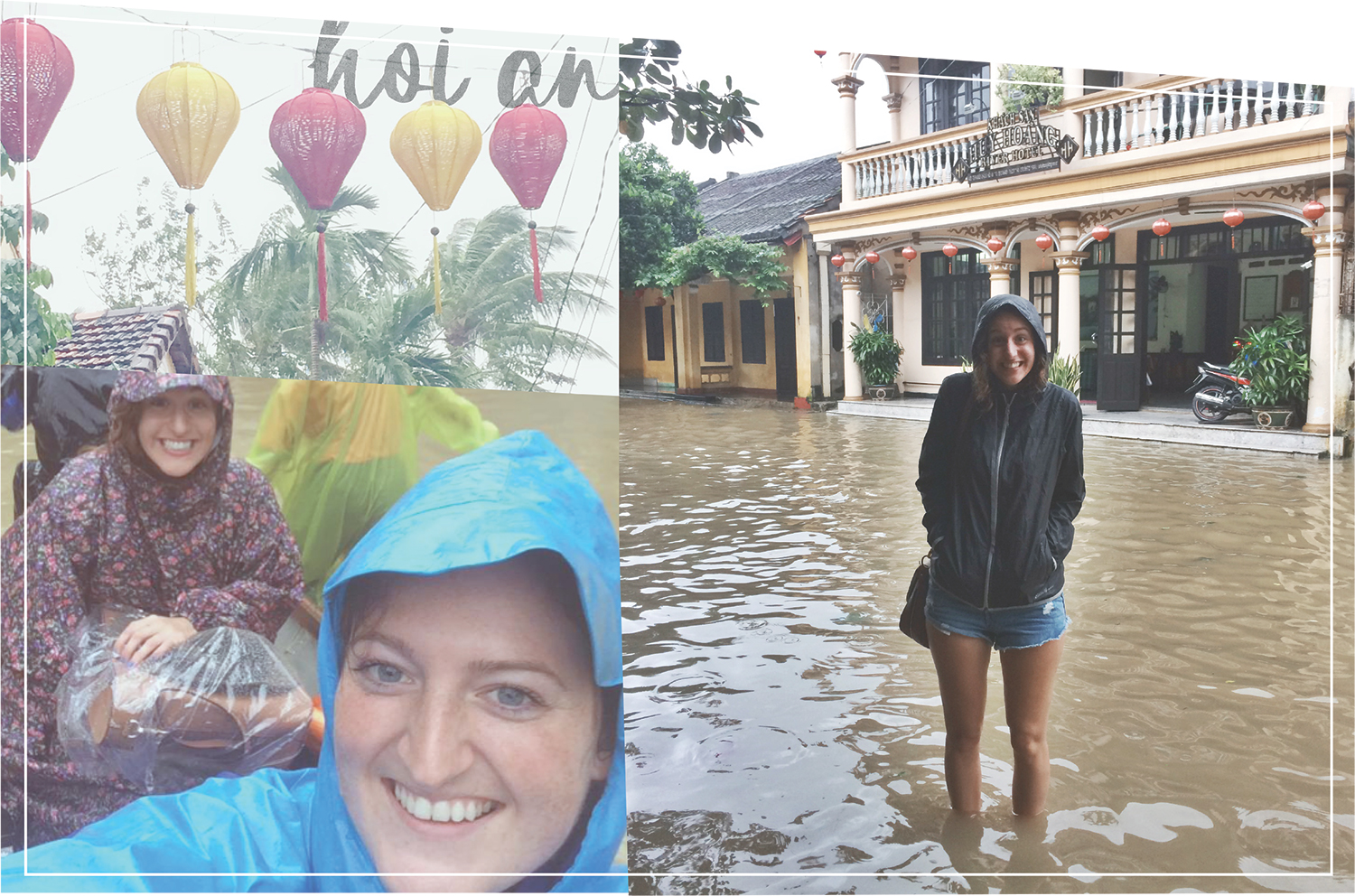 Hoi An is also well known for getting tailored clothes made and what a fun experience. You may feel slightly bombarded by shop owners, but we found a lovely group of ladies who handed us books and books of clothing styles and showed us walls and walls of different fabrics and silks. What I would suggest is taking a few items you already own that you love and getting them re-made in new colours. I brought a shirt and got it made in two more colours as well as a dress. Also adding to my wardrobe were two rompers and a coat (and imagine, a turn around time of less than 24 hours) and overall was really happy with my items. Don’t expect incredibly cheap, but it’s something custom and designed, just the way I like it.

We stayed at a cute hotel, Vinh Hung Library Hotel, but unfortunately the water went straight to the door and we had to change cities a night early. (Imagine having to take a rowboat up to higher ground just to catch a taxi, rain ponchos and all).

Our next destination meant taking our first train, and while “some-what” straightforward, provided quite the confusion. Whether something was lost in translation, our train tickets had a clear “6” on them, and when asking a train employee if we were in the right place, he proceeded to turn the “6” sign upside down into a “9”. Luckily, we thought it was hilarious, found our spots, and were en route to Hue.

Hue was a quick little trip, but we explored the imperial city and were amazed by the Chinese influence. We also stumbled upon the cutest little restaurant called Nook (for both late night drinks and breakfast) who’s owners were incredible friendly and the decor and vibe were oh so cozy. And looking to have a cup of tea in a large tea cup? Check out The One Coffee + Bakery. (if only they moved like the rides in Disneyland). 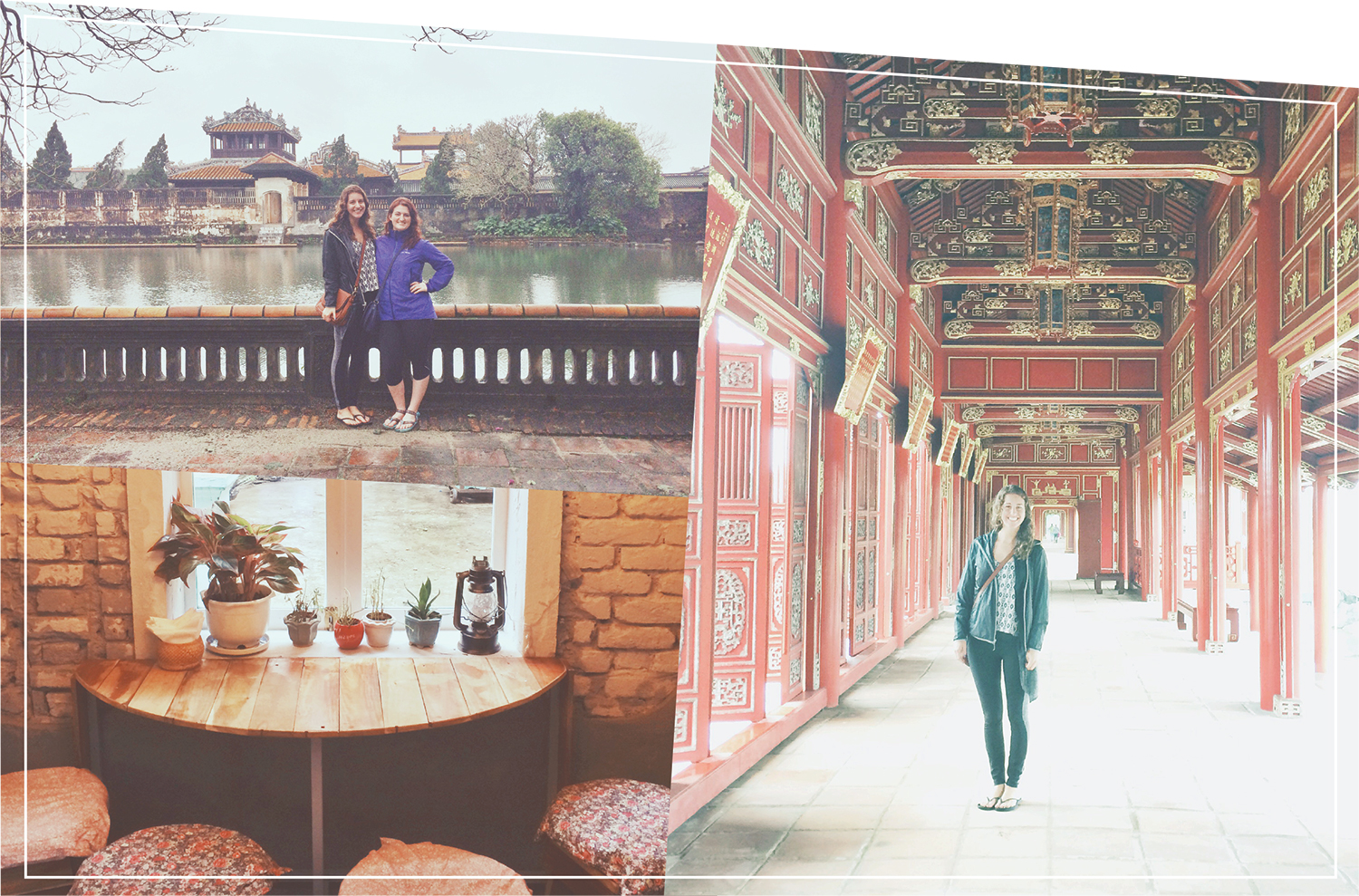 As we moved throughout the country, we began to make our way to the North of Vietnam, seeing little hints of the differences between the North and South. One of my highlights of this trip was definitely the Phong Nha caves, which provided a day of not only adventure, but a surreal experience of these rock formations. We did the Grand Paradise Caves and couldn’t help but be awe-struck and look up and what we were seeing.

In the afternoon, we suited up for zip lines, and headed into the dark cave. Using only our headlamps, we made our way deeper and deeper towards a mud bath, where you couldn’t even sink if you tried. Let’s just say my bathing suit needed to be washed, A LOT, after that day. 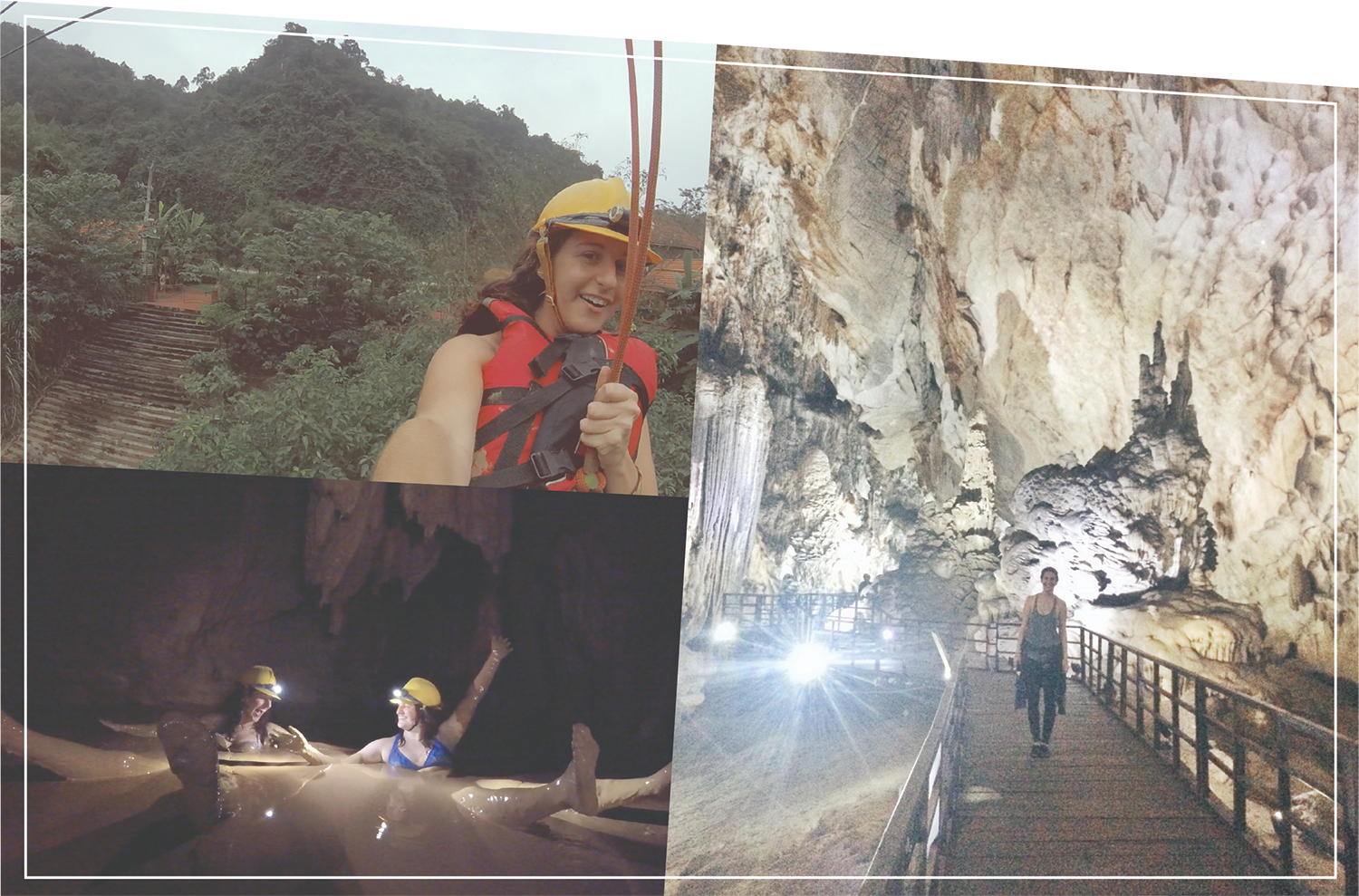 An overnight train (bring some noodles, they provide hot water on the trains) took us to Hoi An, where we immediately hopped on a bus ride to Halong Bay. These few days too reminded me of why I absolutely love travel, how a group of strangers on a bus can become instant friends after being stuck on a boat together. We used Oasis Bay Party Cruises and only had time do the one night, but I was absolutely amazed at the beauty of Halong Bay. Photos could never do it justice, and around every corner was more and more beauty. The group of us kayaked through these stunning islands, with two Canadian girls leading the pack (and living up to stereotypes). At with the name “party cruise”, expect a night of drinking and dancing. 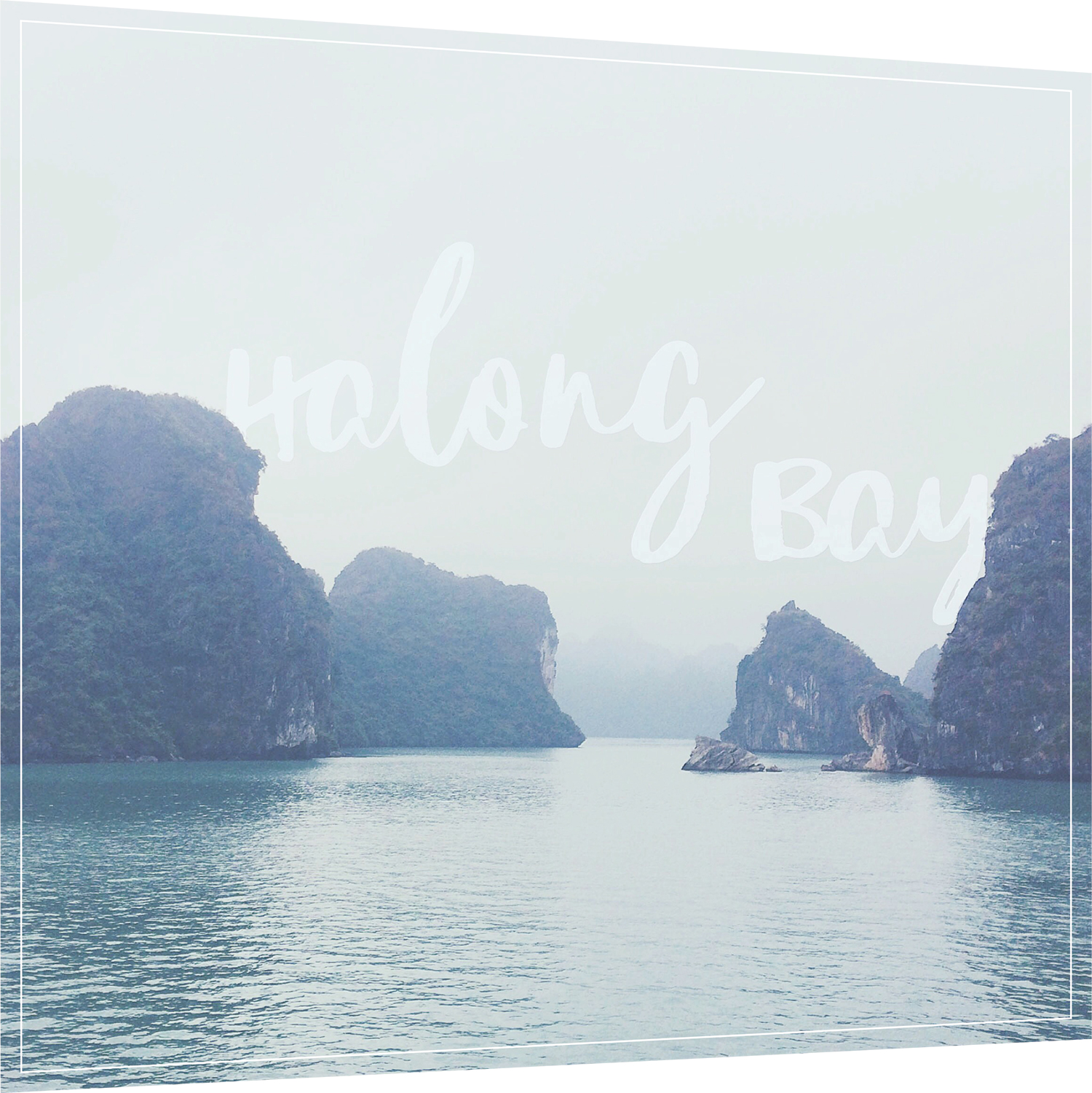 If we had more time, Sapa was highly recommended (but you need at least three days to do a home stay), so we headed back to Hoi An for our last night. We met up with some fellow party cruisers, filled with beer corners (head here) and our last bit of Vietnamese food, small plastic chairs and all. 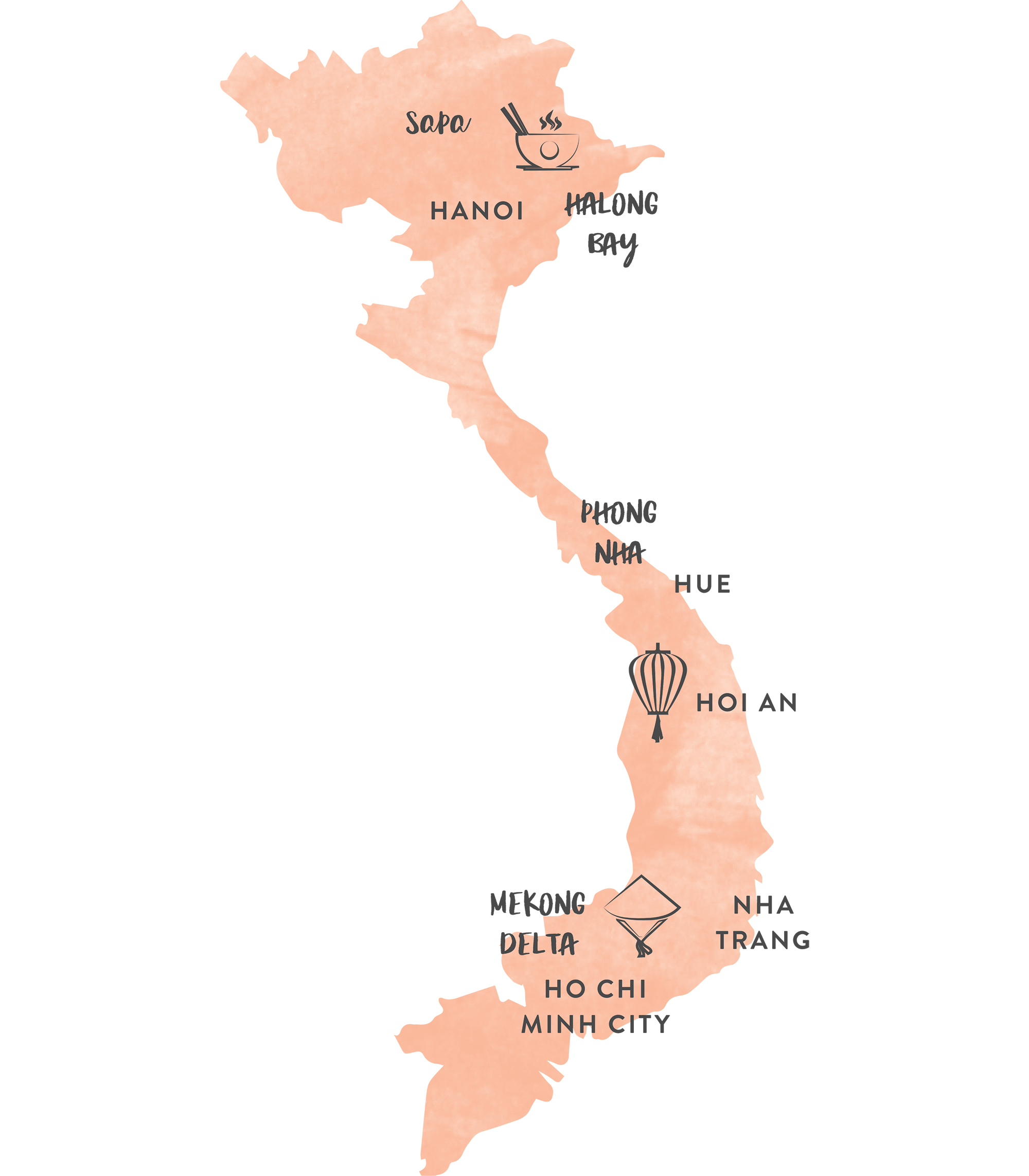